The Lord’s Supper: History of Communion 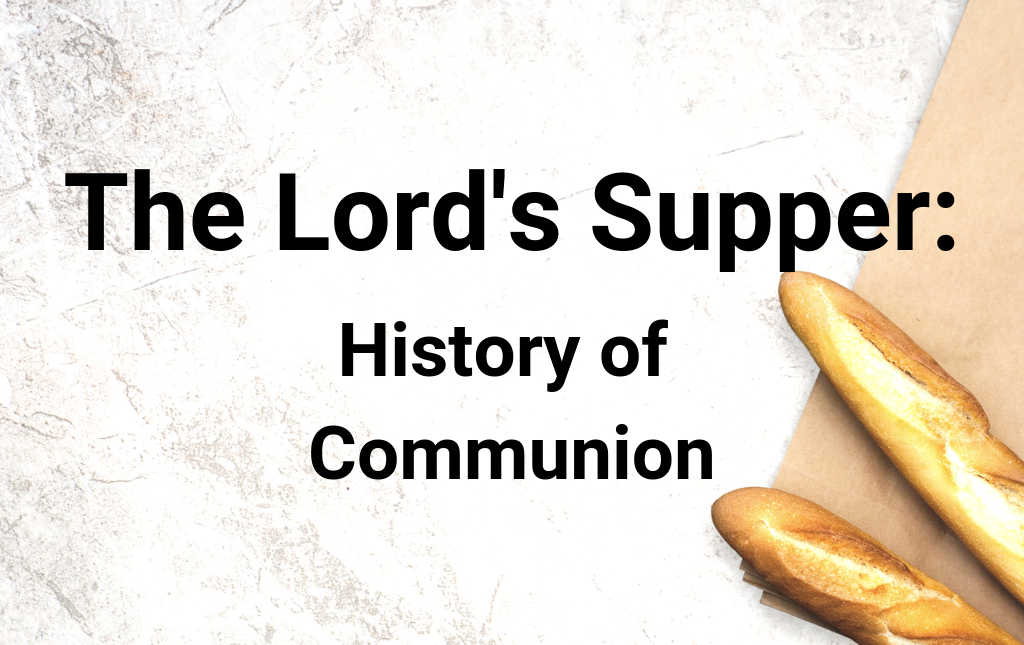 The Lord’s Supper: History of Communion

Today we commonly refer The Lord’s Supper as Communion. We need to know the history of Communion in order to know why we take Communion. Jesus instructs us to observe two different ordinances (or sacraments) in the New Testament:  Baptism and the Lord’s Supper.

Jesus initiated this practice at the last supper (Matt 26:26-29), the meal that he shared with his disciples in the upper room before he was crucified. However, the Lord’s Supper has roots in the Old Testament.

In fact, we need to go back to Moses to see how this tradition was started. If we recall, the last meal that Jesus and his disciples celebrated together, was the feast of Passover.

Let’s just do a brief review. When Pharaoh sent Moses and the Israelites out of Egypt, God instructed them to do a few specific things.  One, they were to take a lamb, and not just any lamb, but a lamb without blemish (EX 12:5) and they were to kill it at twilight and then put some of the blood on the doorposts outside of their homes.  The blood was to be a sign to the LORD that the inhabitants of the home were to be free from the punishment that God had ordained – to kill the first born of man and beast in Egypt for the sin of idolatry (EX 12:6-14). This blood on the doorposts saved the first-born of the Israelites and their livestock from certain death.

The Israelites were to celebrate this feast every year in remembrance of the fact God passed over them that day and did not destroy them but instead, released them from their bondage to Egypt and the associated slavery. Hence the name of the celebration – The Passover.

All 4 gospels including 1 Corinthians records this event.  On the day of Passover, Jesus meets with his disciples one last time before he goes to the cross. He initiates the New Covenant that will be the source of salvation for all those who believe on him.  Apostle Paul confirms the reality of why we celebrate the Lord’s Supper then and today and until the Lord returns:

“For I received from the Lord what I also delivered to you, that the Lord Jesus on the night when he was betrayed took bread, and when he had given thanks, he broke it, and said, “This is my body which is for you. Do this in remembrance of me.” In the same way he also took the cup, after supper, saying, “This cup is the new covenant in my blood. Do this, as often as you drink it, in remembrance of me.”

This new covenant in the blood of Jesus Christ is the power behind the forgiveness of sins. Those who place their faith in the Lord Jesus Christ as their only hope for salvation will be part of the new covenant.

Old Testament sacrifices had to be repeated every year as a ritual. Even the priests had to sacrifice for their sins as well as the sins of the people.  But Jesus is the perfect lamb that was slain – once for all. There is no more need for animal sacrifice to forgive mankind’s sin.  Jesus announced this solution himself at that final Passover meal where he broke the bread and drank the wine with his disciples. And that is why we call it The Lord’s Supper today.  There was no need for a lamb because Jesus is the perfect lamb.

The bread and the wine (or juice) that we use in the communion celebration is a reminder to all Christians that Jesus Christ has freed us from our bondage in slavery to sin, just like the LORD freed Israel from the bondage of slavery to Egypt. We do it in remembrance of Jesus.

We can help simplify communion preparation

At Whole In One Communion, we make and sell prefilled communion cups to churches in Australia. Our goal is to help simplify communion preparation.

Update Sept 2021: Instead of low gluten, we will be able to provide communion cups that are gluten free... Read More

The Core Message Of Communion

Communion has been celebrated by virtually every branch of Christianity over the last 2000 years. Some call it the... Read More